What is ALEC and how do they influence education "reform?"

If you have been reading or watching any news over the past few years, you have probably heard the name ALEC. Who or what is ALEC and why are they so interested in education “reform” in Pennsylvania and across the country?

ALEC stands for the American Legislative Exchange Council. This organization has an 8 million dollar annual budget that they use to write a “library” of sample bills that they want passed in as many states as they can influence. Outlets like the Center for Media and Democracy rightly call them a “corporate bill mill”.

Even if you are not quite sure what ALEC is, you have likely heard of some of their most popular legislation: “Stand Your Ground” laws, “Parent Trigger” bills, and voter ID requirements are some of ALEC’s most wide-spread and anti-democratic offerings.

These bills have been made law in many states, and some are currently rearing their ugly heads in Pennsylvania.

Education advocates believe that ALEC is now interested in the “reforming” of public education because there is much money to be made for private businesses as more schools are turned over to management companies and for-profit businesses receive tax breaks for funding private schools (through vouchers and tax credits).

The parent trigger bills, for example, allow a small part of a community to vote to turn-over its public school to a for-profit operator—most of these bills allow 180 days to undo a public institution that has served a community for many years. 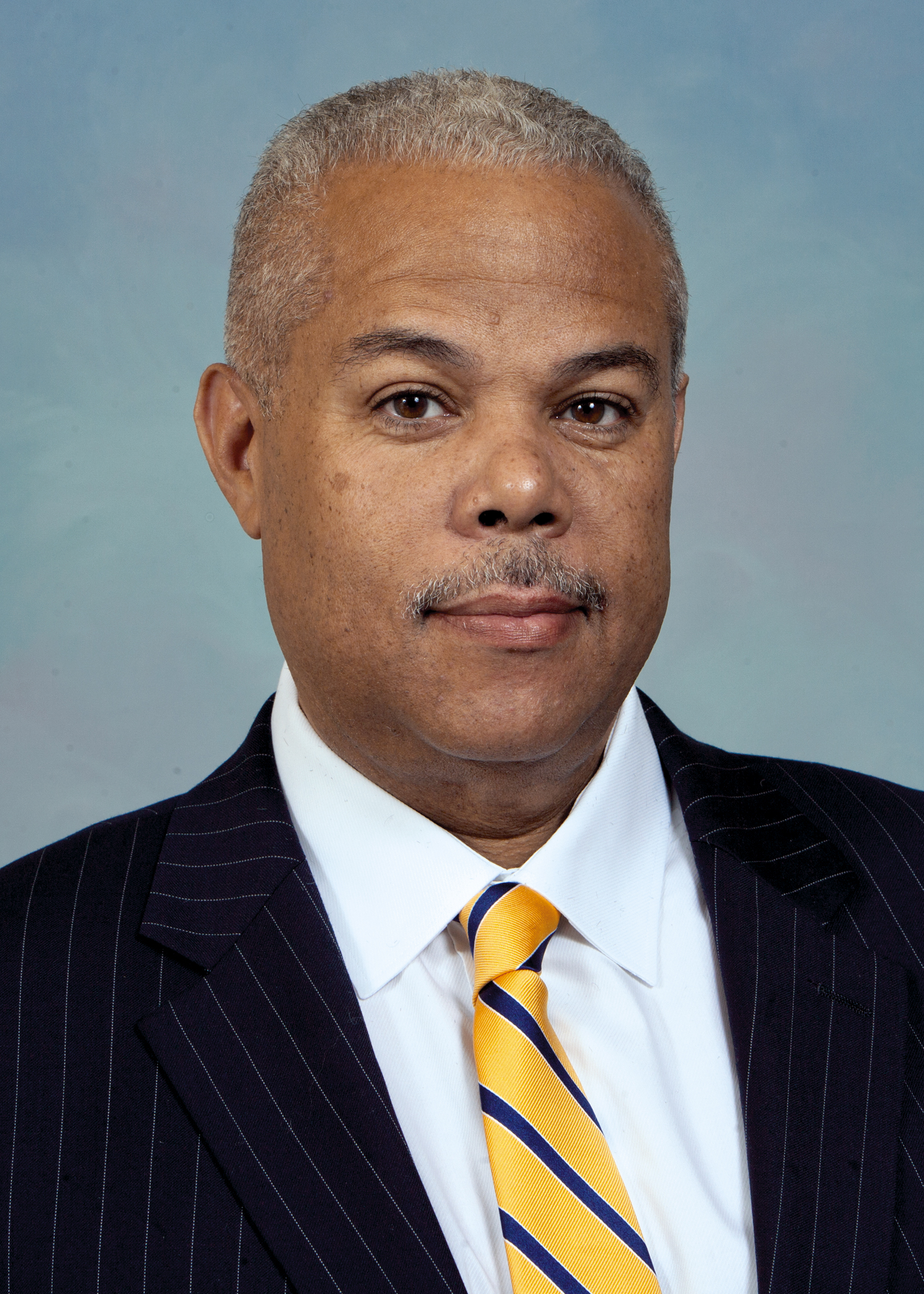 charter school proponent, and also a failed charter-school operator--has sponsored just such a bill in Pennsylvania.

Another way to make sure public schools are turned over to private companies is to ease the charter school authorizing rules and regulations. In these ALEC-sponsored bills, authority to approve new charters is removed from local agencies such as school boards and school districts and given to the state itself, or other institutions such as universities. This forces districts to pay for schools they did not authorize and cannot afford and steals much-needed funding from true public schools.

Unfortunately, many Pennsylvania politicians have been taken in by ALEC’s anti-democratic agenda. Some are receiving campaign contributions from ALEC-sponsored PACs in order to bring ALEC’s agenda to our state, and some are members of ALEC or are simply sponsoring ALEC’s bills. What follows is a short list of ALEC-influenced politicians and their organizational allies in Pennsylvania. Some of these politicians have accepted tens or even hundreds of thousands of dollars from ALEC-affiliated groups.

Additionally, here's a list of ALEC-influenced power players in Pennsylvania:

Thanks to the Center for Media and Democracy for its extensive and interesting report.  We suggest you read the whole report for a comprehensive understanding of ALEC's reach in Pennsylvania.

Are you a member of the Penn community? Know somebody who is?

Spread the word about this lunchtime discussion, organized by three Caucus members who are also students and faculty members of the university. Tuesday, September 24th at noon, GSE Room 322! 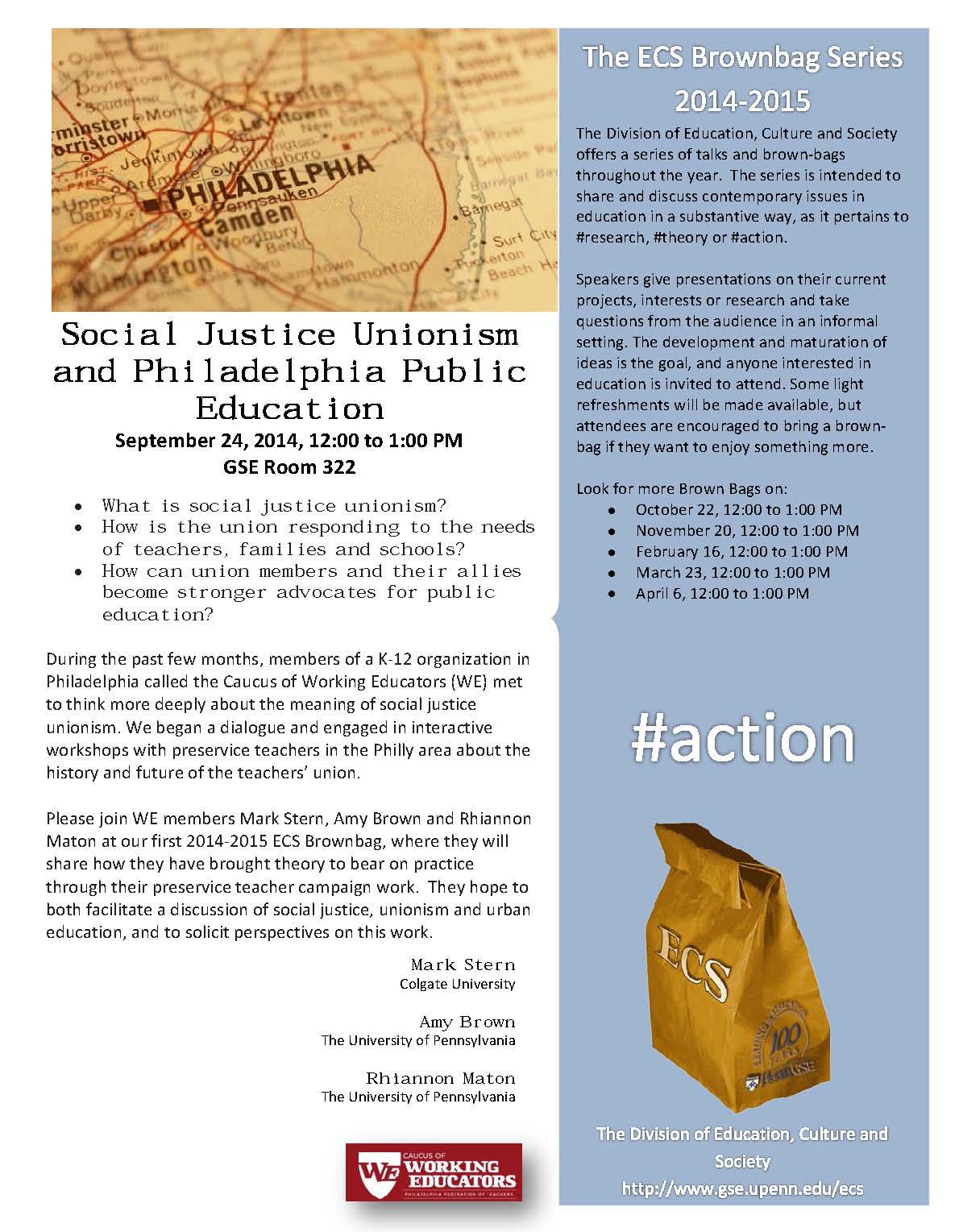 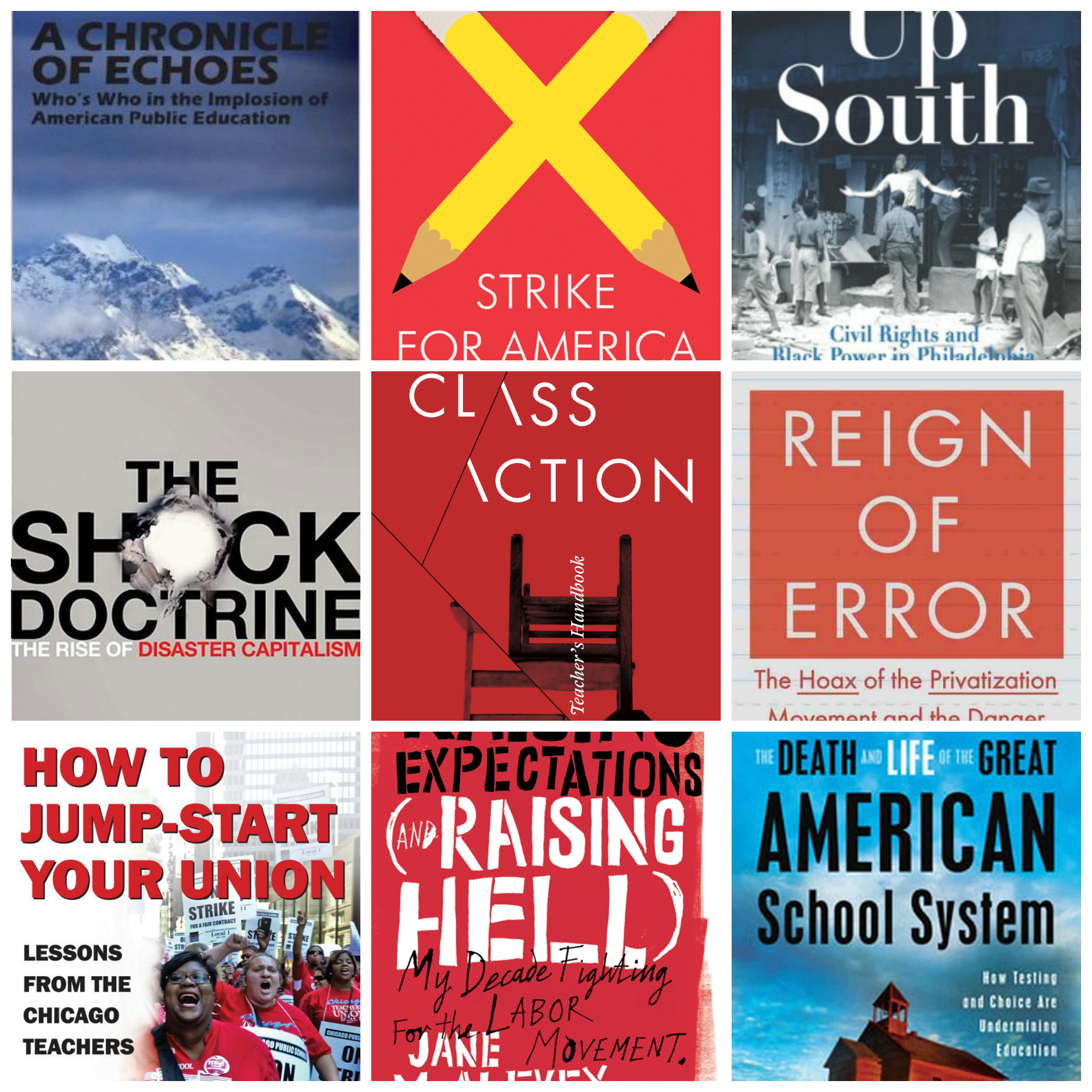 This week kicked off the opening meetings for two of WE's Social Justice Unionism Summer Book Clubs, with the rest starting over the next few weeks.

It's never too late to join in with teachers, parents, and community members us to discuss some of the most pressing concerns to education, teachers, and unions. Click here for descriptions of the books we're reading this summer.

Book club times and dates are listed in the calendar below. Because many of the events are at members' homes, we have not published the locations online.

Please email us at [email protected] for exact location info.

Book Event: "Strike Back" with WE on July 10th

Update: Working Educators is now an official co-sponsor of this event!

For inspiration on reigniting the labor movement today, Joe Burns believes we should look to the militant public worker strikes of the 60's and 70's. In Strike Back: Using the Militant Tactics of Labor's Past to Reignite Public Sector Unionism Today, Burns explores how during the 1960s and 1970s hundreds of thousands of teachers, sanitation workers, and other public employees rose up to demand collective bargaining rights in one of the greatest upsurges of labor history.

Joe Burns' book "Strike Back" uncovers this history of militancy to provide tactics for a new generation of public employees facing unprecedented attacks on their collective bargaining rights.

On July 10th at the Wooden Shoe, Joe will be discussing his book and leading a conversation on how we can rebuild a powerful labor movement in Philadelphia. Working Educators will be there, and we hope you can join us too! Strike Back: Using the Militant Tactics of Labor's Past to Reignite Public Sector Unionism Today, by Joe Burns

Working Educators and Teacher Action Group are proud to announce our new Social Justice Unionism Summer Reading Series. Join a small group of colleagues, educators, and supporters from around the city to hone in on some of the biggest issues facing education and unionism.

Whether you're looking for an overview of education politics, exploring neoliberalism, or discovering how union activists have energized their unions around the country, and so much more- we've got a book for you! Take a look at the book list below, and then go to our sign up page for more info and to get your name on the list!

-Reign of Error:  The Hoax of the Privatization Movement and the Danger to America’s Public Schools, by Diane Ravitch

-The Death and Life of the Great American School System:  How Testing and Choice Are Undermining Education, by Diane Ravitch

-Up South: Civil Rights and Black Power in Philadelphia, by Matthew Countryman

-Raising Expectations (and Raising Hell): My Decade Fighting for the Labor Movement, by Jane Mcalevey and Bob Ostertag

-The Shock Doctrine: The Rise of Disaster Capitalism, by Naomi Klein

-Strike for America: Chicago Teachers Against Austerity, by Micah Uetricht

-How to Jump-Start Your Union: Lessons from the Chicago Teachers, by Labor Notes

-A Chronicle of Echoes:  Who’s Who in the Implosion of American Public Education, by Mercedes K. Schneider 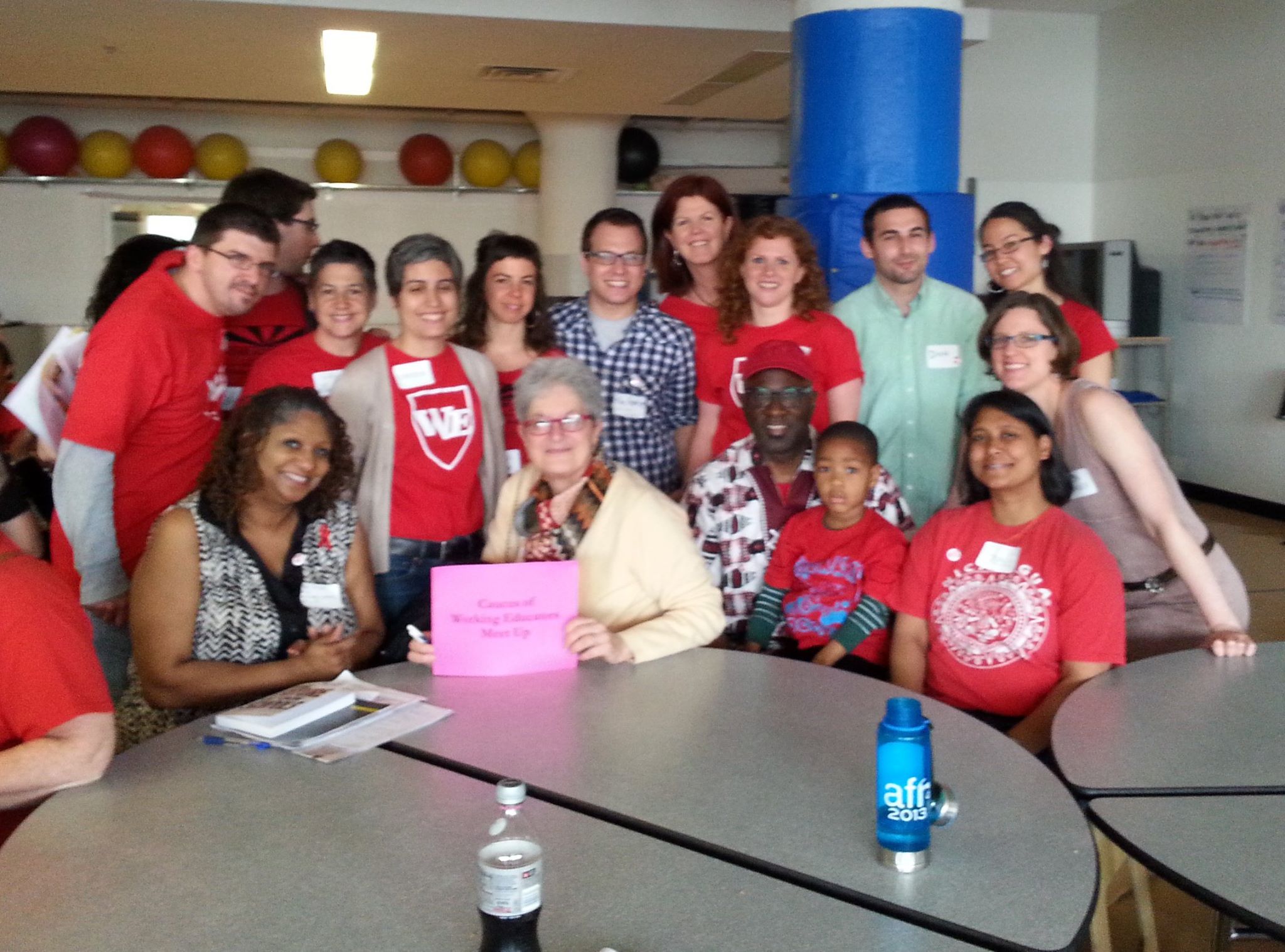 Here are just a few ideas that Labor Professor Lois Weiner shared during her keynote address at the Education for Liberation conference:

She ended her talk with these words: what's morally right is politically essential.

Those of us who were present walked away inspired by her talk. To continue the conversation about social justice union work with us, sign up for one of our regional discussion groups today!

Thanks to all of you who packed our Launch Party last Friday after work! It was great to connect with each other, learn about our work as fellow educators, and talk about how we can continue to support our union.

In fact, the last event was such a success, we've scheduled FIVE new events for next month!

Our new Regional Discussion Groups are a chance for networking and discussion around a common text. This first round, we'll be reading “Class Action” by CORE Caucus & Jacobin Magazine – bring your free copy from the Launch Party or download the PDF here. This booklet was published specifically to support the work of union educators around the country. It's a must read!

The discussion groups are happening in five locations the week of April 21-25 -- Center City, Fishtown, Northeast, West Philly, and South Philly. Check out our event page to see the dates and RSVP for the location that works for you!

The text is a prompt for discussion of many issues -- you don't have to read the booklet cover to cover to join in! We also encourage you to bring a fellow educator – this event is open to all and meant to energize our union through knowledge.