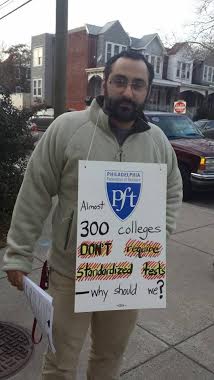 Teachers were issued letters compelling them to attend investigatory conferences on Thursday of this week.  The district move follows this City Paper article announcing that 17% of students at Feltonville School of  Arts and Sciences refused to take the PSSAs and other assessments. News of the action prompted Council members María Quiñones-Sánchez, Mark Squilla and Jannie Blackwell to issue a public statement of support for Feltonville families on Thursday saying “Until we put some limits on this obsession with testing students, we will see protests like that at Feltonville. We stand with families who are making the choice they believe is best for their children.”

With the recent appointment of a new Pennsylvania Secretary of Education, Pedro Rivera, Council members Quinones-Sanchez, Squilla, and Blackwell called upon the School Reform Commission to formally request a waiver for this school year, and to begin a review of the long-term strategy to reform the use of standardized testing.

“We, as parents, have a right to say no to the test”, says Heidey Contrera, the mother of 8th grader Natalie Contrera, who, having moved to Philadelphia from the Dominican Republic in 2011, is designated an English Language Learner at Feltonville. “The test is not a good measure of my daughter’s ability. It is not a fair way to judge her. And we’re not taking it.”

“Parents have the right to opt out – that is an indisputable right,” said Helen Gym, co-founder of Parents United for Public Education, one of the groups to come out publicly in support of parents and teachers at Feltonville. “The District has an opportunity to work with parents and teachers on an issue of common gain rather than once again being on the wrong side of the table.”