March with WE at the People's Climate March: Sun, Sept 21st

In a little less than two weeks, activists, educators, and unionists from around the country will be gathering in New York City for the largest environmental march in the history of the United States. The Caucus of Working Educators will be there, marching alongside other unions and activists from Philadelphia (plus our hot new WE banner!).

350 Philly and Action United have organized low cost buses to and from Philadelphia next Sunday, but they're going fast.

Reserve your ticket now. Buses will be leaving at 8am and will return by 7pm that evening. Please let us know that you're coming, or if you have any questions, by emailing max.rosenlong [at] gmail.com. We will follow-up with a meeting place and time in NYC. 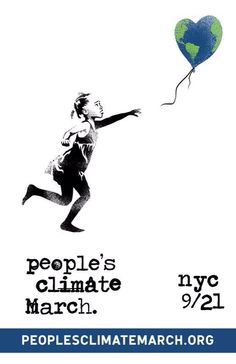 Why is climate change also a labor and education issue? I'll let Naomi Klein (whose book The Shock Doctrine was one of our summer readings groups) explain:

Our current economic model is not only waging war on workers, on communities, on public services and social safety nets. It’s waging war on the life support systems of the planet itself. The conditions for life on earth.

...[Climate Change is] a powerful message – spoken in the language of fires, floods, storms and droughts – telling us that we need an entirely new economic model, one based on justice and sustainability.

In Philly's public schools we're all too familiar with the effects of this unsustainable model, as we begin yet another year of budget crises and cuts. Join WE on Sunday, Sept. 21st to stop global warming and to build a just and sustainable economy.

Why Unions Need to Join the Climate Fight, Naomi Klein

A Call to Arms: An Invitation to Demand Action on Climate Change, Bill McKibben