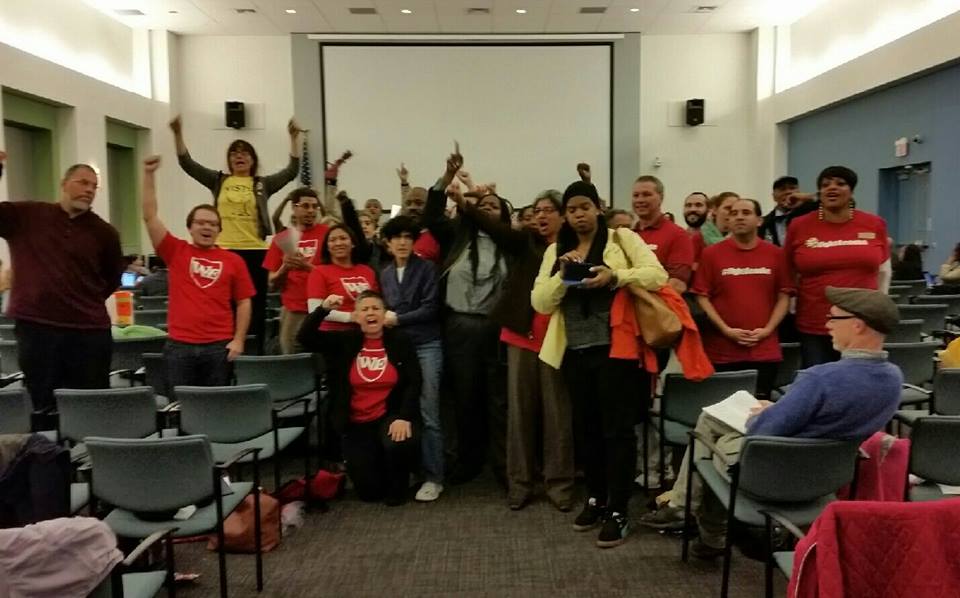 (Educators and families from Cooke, Huey, and Wister fight back against their schools being turned into charters.)

We applaud last night’s Pennsylvania Supreme Court decision limiting the powers of the School Reform Commission. The ruling offers a breath of relief to members of the Philadelphia Federation of Teachers, who no longer have to worry about our contract being unilaterally cancelled by the School District of Philadelphia. It also creates the opportunity to finally address years of unlawful hiring practices, ignoring seniority, and the back pay we deserve after years of missed step increases.

However, the ruling also highlights the need for strong organizing —and a strong union— to fight back against the continued assault on public education.

While the ruling potentially puts us back on the path to negotiate a contract, it also opens the door for uncapped charter school expansion. With the District on the hook to pay for it, this will channel further funds away from district schools to charter operators, and threatens the elimination of school staff, services, and buildings— when we are already operating with deeply inadequate staffing and resources.

How soon will this happen? The same night of the court ruling, the SRC approved three new charter school proposals for 2,500 students, putting approximately 100 PFT positions at risk. At this rate, how many of our union brothers and sisters will be left to enjoy the next contract we win?

Our union must act to reverse the SRC’s financing of the charter school industry before it swallows up our public school system. This can only happen by working alongside parents and communities to proactively invest in and fight for our public schools, instead of watching as more and more schools are closed or turned over to charter operators.

We must be a clear voice heard in Harrisburg advocating for the schools Philly students, parents, and educators deserve. And we must make sure the politicians who represent our members and schools —many of whom advocated in favor of charter schools at the February 16 SRC meeting— know that there are political consequences to their giveaway of our schools.

We need a union that can fight in court, in our neighborhoods, and in the streets with equal force. Alongside news of the failure of Friedrichs, the labor movement has a new opportunity to focus on deep organizing. As the rank and file caucus of the PFT, we remain committed to this fight on all fronts.