Remind Mayor Kenney: Stand up to Comcast against Wage Discrimination! 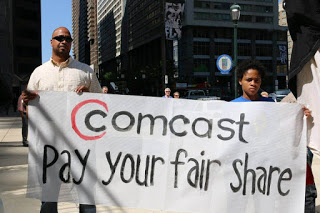 Comcast has been bullying our mayor. Recently, the corporation threatened to sue if Mayor Kenney does not veto a bill that passed unanimously through City Council. The bill, which aims to prevent wage discrimination against women and minorities, would prohibit employers from asking applicants about their previous salaries.

Why is Comcast so aggressively opposing the bill? Because basing compensation on previous salaries allows companies to pay women and minorities less than their white male counterparts. Women, and especially women of color, are often paid less in their first jobs, which sets them up for a lifetime of lower pay. As a result, women are paid 80% of what men are paid on average in the United States.

In the name of economic development, Philadelphians have already sacrificed a lot in order to make Comcast feel welcome in our city. Taxpayers provided over $40 million in state grants to subsidize the Comcast Center; we give up millions in revenue each year in the form of tax abatement; and, we pay more for our cable TV than Comcast customers in other cities. Our city has bent over backwards to protect Comcast’s bottom line.

Perhaps this is why Comcast feels so comfortable telling our mayor what to do.

Now is the time for Mayor Kenney to send a clear message to his corporate bully by signing the wage discrimination bill into law. He has until January 26th to make his decision.

While Kenney has a solid history of sticking up for workers, he may need some encouragement to stand up to Comcast. We need to remind him of his responsibility to protect workers from discrimination and protect our city from corporate greed.

You can email ([email protected]), tweet (@PhillyMayor), or call (215-686-2181) to let him know that teachers are paying attention and that we expect him to stand up for Philly’s workers.