SRC’s Demise Is a Victory for Organizing 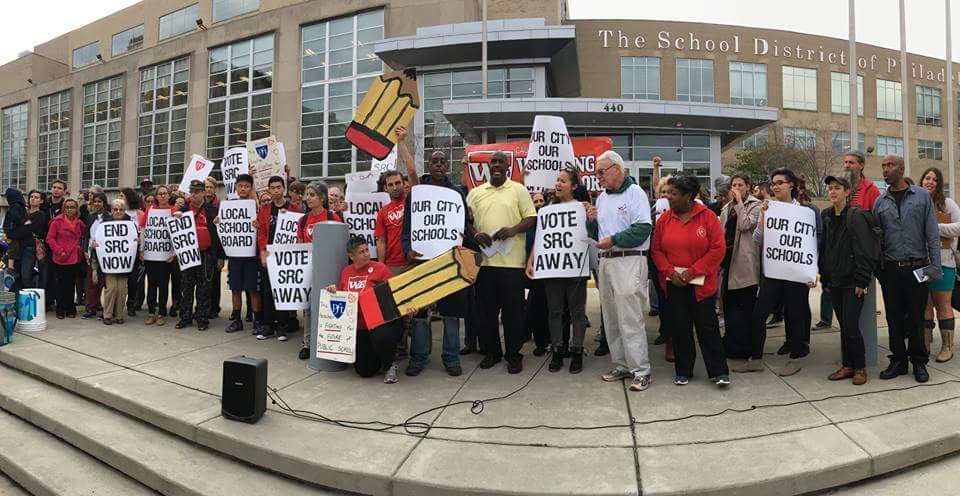 For the first time since 2001, Philadelphia will soon control its own schools. With Mayor Kenney’s endorsement, the SRC is almost certain to vote for its own abolition, ending the failed experiment that put Harrisburg in control of the Philadelphia School District.

It is a victory that would not have happened without strong, grassroots organizing.

After more than 15 years, why have the Mayor and SRC chosen this moment to dissolve? The Mayor has spent the last year refusing to commit to a particular timeline. As recently as a few weeks ago, he said that he expected a vote on SRC abolition to happen “sometime in 2018.” Meanwhile, members of City Council and the Mayor’s staff had told us in recent months that there was little movement towards SRC dissolution, and little likelihood this would change without outside pressure. So what changed?

The Our City Our Schools campaign launched last October with a goal of bringing down the SRC. By participating in this work, the Caucus of Working Educators was proud to bring teachers to stand alongside parents, students, and labor brothers and sisters from across the city.

Our City Our Schools soon adopted an unequivocal timeline: the SRC must vote to dissolve by the end of 2017. In the public eye, we organized a series of escalating actions designed to bring public attention to this timeline, including public forums and protests at SRC meetings. This drew significant attention to our campaign and demands, culminating in over a dozen articles about our campaign and timeline in August and September alone.

At the same time, we applied direct pressure to Mayor Kenney, meeting with his office several times and hosting direct actions including multiple call-in campaigns. Finally, we not only met with SRC members, but we met with every member of City Council’s Education Committee, receiving many commitments to push for the SRC’s abolition. It was at the peak of this work, as we were preparing to push for a City Council resolution calling on the Mayor and SRC to support dissolution, that we started to get wind that the Mayor would commit to our timeline.

After over a year of organizing, we are incredibly grateful to Mayor Kenney for his embrace of the Our City Our Schools timeline and the SRC members who are likely to vote for local control.

While we have taken no stance on what system should replace the SRC, we did push for the conversation on this issue to be transparent and take public input into account, calling for the creation of a citywide task-force to lead this conversation. Instead it seems that a decision has already been made to commit to a particular model of Mayoral-appointed board. Whatever the model, we will continue to push for it to be as inclusive and transparent as possible.

In the meantime, we are aware that nothing is ever finished until it is finished. We will continue to push for SRC abolition until the day the Secretary of Education signs off on it, and after that we will fight to make sure that the new Board and its nominating committee are filled with people who understand and are committed to public education, and will be responsive to the needs of our schools and communities -- including the parents, educators, students, and community members who are the true stakeholders of our schools.