In 2018, the call for the hiring and retention of Black educators was adopted as one of the demands of the National and Local Black Lives Matter at School Week of Action.  While not a new issue facing our nation's schools, this demand came in response to the recent attention given to the lack of Black educators across the nation, especially in schools serving predominantly Black and Brown students.  After years of ongoing asks and pressure, the School District took the first step in meeting the demand for more Black teachers by making current teacher demographic information available to the public.

Philadelphia educators, parents, and other allies have been pushing the district for the past couple of years to collect and release the racial demographic information of the city’s teaching force.  Working in collaboration, the Racial Justice Committee of WE and the Melanated Educators Collective (MEC) have been involved in ongoing conversations with the Board of Education and SDP to release this data as a first step in the campaign to hire and retain more Black teachers in our city.  Most recently, in August, parents spoke at the Board of Education meeting demanding from Superintendent Hite that this information be publically accessible, which Dr. Hite promised would happen, adding a thank you for MEC’s work around this issue.

Almost two years after this effort began, last week the district finally placed teacher demographic information on the school district website.  A detailed report of the racial breakdown of teachers, including gender and school type can be read here.  Additionally, this data will be collected and released annually in November.  The numbers included in this report, from 2018-19 school year show that while 48.5% of students in Philly public schools are Black, only 23.5% of teachers are Black, with close to 70% of teachers identifying as white. This year SDP stated that approximately 30% of new hires were educators of color, which follows the pattern of racial imbalance between the student and teacher population.  Don’t all of our children deserve to see themselves represented in the many faces who teach them every day?

Having this data publicly and easily accessible is an important step in the campaign to hire and retain more Black teachers.  Additionally, the SDP will be working with the PA Department of Education in an effort to hire more Black teachers, called A2E, which we must keep an eye on.  This partnership was mentioned by Dr. Hite at the August Board of Education meeting, but we have yet to be able to find more information about this program. We applaud that the district is putting energy into bringing Black educators to our city's classrooms.  However, top-down efforts that exclude teacher, student, parent, and community input is an incomplete solution to the structural issues that have led to the shortage of Black teachers.

While we are pleased that the District has finally made this information available to all, without having to file a right-to-know request, this is only the first step in making sure our city’s teaching force more accurately represents that of our student population, which studies have shown is beneficial to all students regardless of race,  and put systems in place that will help with the retention rate of Black teachers.

If you are interested in getting involved with this campaign, the Racial Justice Committee will have its first meeting this Wednesday, September 18th from 4:45-6pm at 2o00 N. 7th Street. 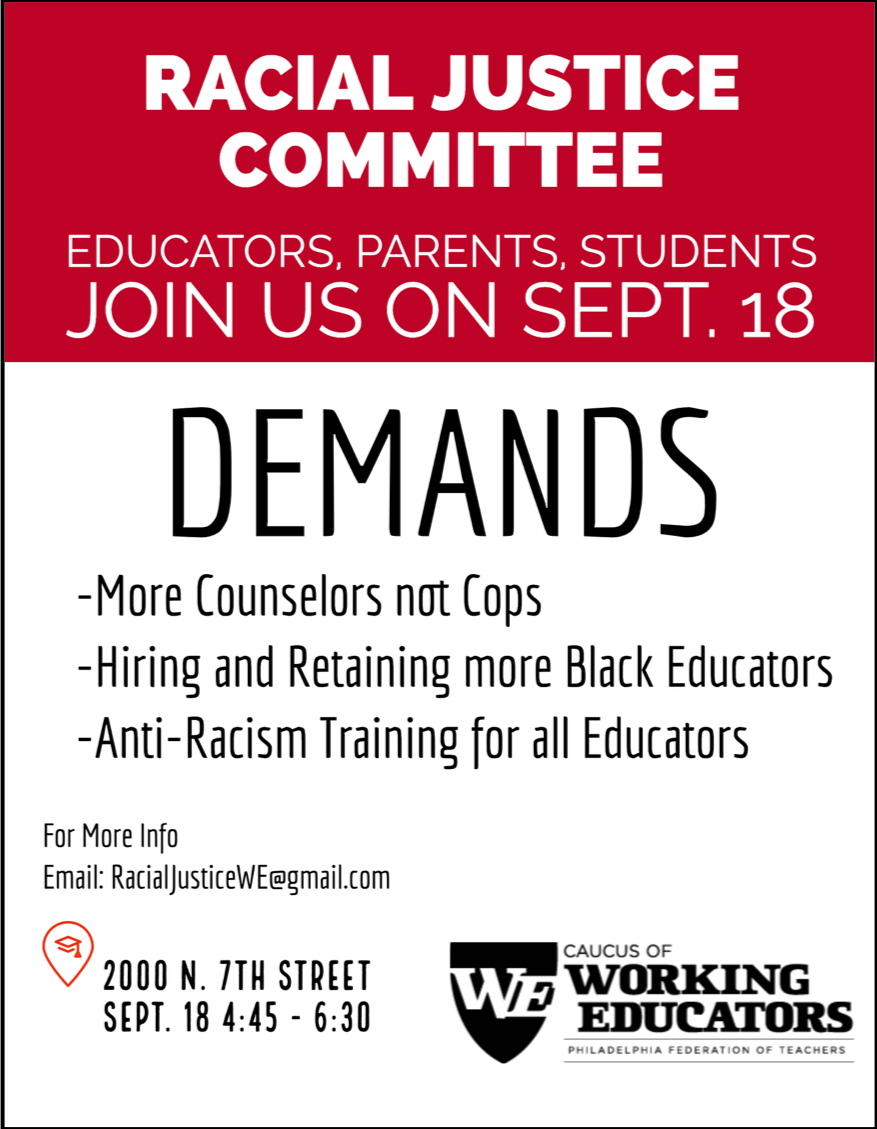