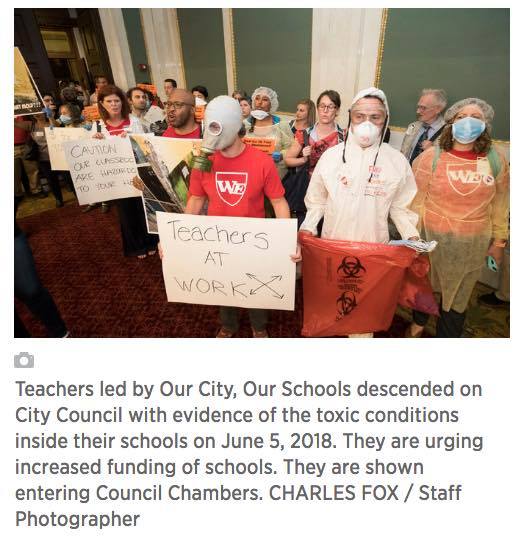 by Kathleen Melville and Tasaday Messina

WE have been making some bold moves lately - shutting down a City Council hearing to call attention to dangerous conditions in our schools, protesting the “phase-out” of Strawberry Mansion, and demanding that the rich pay their fair share to fund Philly schools. We do this because our students deserve much better than crumbling buildings and understaffed schools. And we do this because it works.

This past week, in response to growing pressure from Philly education advocates, Governor Wolf announced an additional $15 million to repair Philly schools. He also called for a major change in state education funding that would increase equity and bring more money to urban districts like Philadelphia.

These victories show that WE can have a powerful voice in shaping the priorities of our city and our state. When we take an active role in our union—by organizing actions that make headlines, by building political power with coalitions like Our City Our Schools, by electing pro-education candidates to office, and by moving more and more of our co-workers to take action—we force our elected leaders to pay attention to Philly schools.

As WE members, we know that Philly students are not getting their fair share. Research shows that our state allocates more money to white students than to students of color. In fact, Pennsylvania’s funding of schools is the most inequitable in the nation, which means that districts like Philadelphia—with fewer white students and higher levels of poverty—have less money to spend per student than whiter districts or wealthier districts in our state. This injustice is what motivates us to fight for fair funding.

Trying to win more funding by playing nice with the powers-that-be simply has not worked.  When WE demand funding, we don’t do it quietly. We don’t do it in hushed voices and behind closed doors. We organize, we take action, and we raise our voices. We do it loud, and it works.