What WE Want to See: Negotiating the Next PFT Contract

Part 1 of a 9-part series of position papers on the substantive steps Working Educators would like to take strengthen the PFT and fight for the schools we deserve. Click here to read all 9 position papers. If you have any questions or comments, please email [email protected] And don't forget to vote on Feb 4th!

At the heart of the Caucus of Working Educators is our drive to represent you, our fellow PFT members, at the negotiating table for an equitable and strong contract from the School District of Philadelphia. We share your frustration with working under a status quo contract for far too long. We recognize the disrespect shown to our union by the district’s attempts to impose contract terms. We join our voices to yours in fear that our deteriorating work conditions might somehow become permanent.

Many members have been concerned about both the lack of momentum in the contract talks, and the lack of transparency regarding the collective bargaining process. We believe that there are substantive steps that our entire union can take to address these concerns raised by teachers across the district.

Our Caucus recognizes that legal decisions and electoral politics play a major role in the collective bargaining process, affecting how and when the PFT negotiates and what compromises we might be forced to consider. However, the Caucus of Working Educators believes that a union’s success at negotiating does not originate with the courts, the legislature, or even the negotiators at the bargaining table. The key to our strength at the negotiating table lies with the power of our collective membership. Building that power requires a newfound commitment to member education and organizing, so that our 11,000 members are ready to mobilize behind their contract demands.

Too many of our colleagues are tired of waiting for a substantive update of where things stand, and too few have any idea what proposals are on the table. We believe that the membership should be engaged throughout the process—making sure that the negotiators are truly representing the priorities of the rank and file, and making sure that members are educated on the various issues being considered.

We will gain the best possible contract when we work to educate and empower our members, make renewed outreach to win public support, and provide meaningful opportunities for union membership to guide its leadership and to compel our district to an appropriate, fair, and moral result.

• Cultivate timely interactions with and feedback from membership to focus the negotiating team on union demands for our next contract.

• Retain legal counsel, intimately involved with current contract negotiations, to continue to work alongside the Executive Board on behalf of PFT members.

• Complement our use of the legal system to defend against illegal overreaches with a proactive and multifaceted strategy—including internal organizing, stronger community partnerships, and carefully orchestrated actions—to keep the public on the side of educators in the political struggle that surrounds contract negotiations. 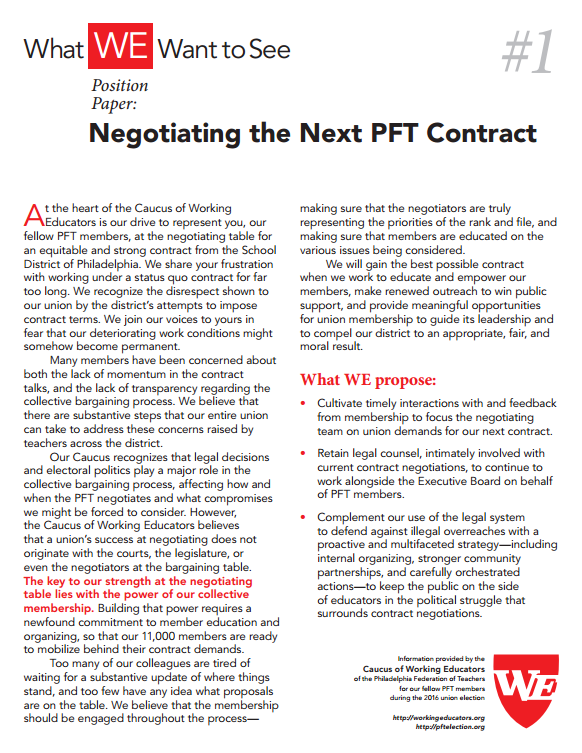