Why I Wear My Working Educators Shirt 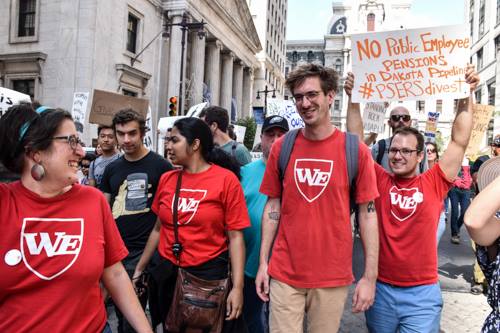 I take my loyalty to the PFT seriously.

The week the SRC tried to cancel our contract, I was at the microphone testifying against them. I have served as a Political Liaison at two schools. I’ve been a member of Building Committee. I have served on the citywide Community Schools Taskforce, whose work directly led to Mayor Kenney’s pledge to bring Community Schools to Philly. I’ve been to every membership meeting since I’ve been a teacher, and I’ve been to countless protests, rallies, and town halls pushing for public schools and their employees. I make it a point to talk about my union with my colleagues as much as possible, and to make sure that my entire outside network knows about our recent contract battle -- and our win last June.

And sometimes I do those things wearing a WE t-shirt.

Let me try to explain why I do wear it.

Look back at that list of actions I have taken. I have done those things – all of them – because I was asked. Because someone had a conversation with me, got to know me, learned my interests and skills, made me feel like part of a movement…and then encouraged me to take the next step and get involved. And in nearly all of those cases, that work – that organizing – was done by people in the Caucus of Working Educators.

As a relatively new teacher, I benefit daily from the support and inspiration of my more experienced colleagues. Likewise, as a relatively new union member, I benefit from the support and inspiration of more experienced union sisters and brothers. Being a part of Working Educators has created spaces for me where I am encouraged to discuss and learn about the union from people who have been around much, much longer than I have. Like in my teaching, I try to use the best of my abilities in service of following the path that they provide for me. And, to be honest, those spaces wouldn’t have existed for me if it wasn’t for WE.

So why do I wear my WE t-shirt?

I would love for people to get excited about that organizing and be a part of it! I know that many people won’t – that the tension of a competitive election is too raw for some, and that the hostile hall of mirrors that is Facebook amplifies the most negative voices at the expense of genuine dialogue.

But for those of you who still don’t trust my intentions, or think I’m naïve, or are wary for any other reasons: I want to talk to you about it. I genuinely want to hear your opinion, hopefully in a place where we can speak to each other respectfully as union brothers and sisters. I want to have that kind of dialogue because that’s something WE has taught me to have.

You can find me at the next PFT action. I’ll be part of the group wearing WE gear.