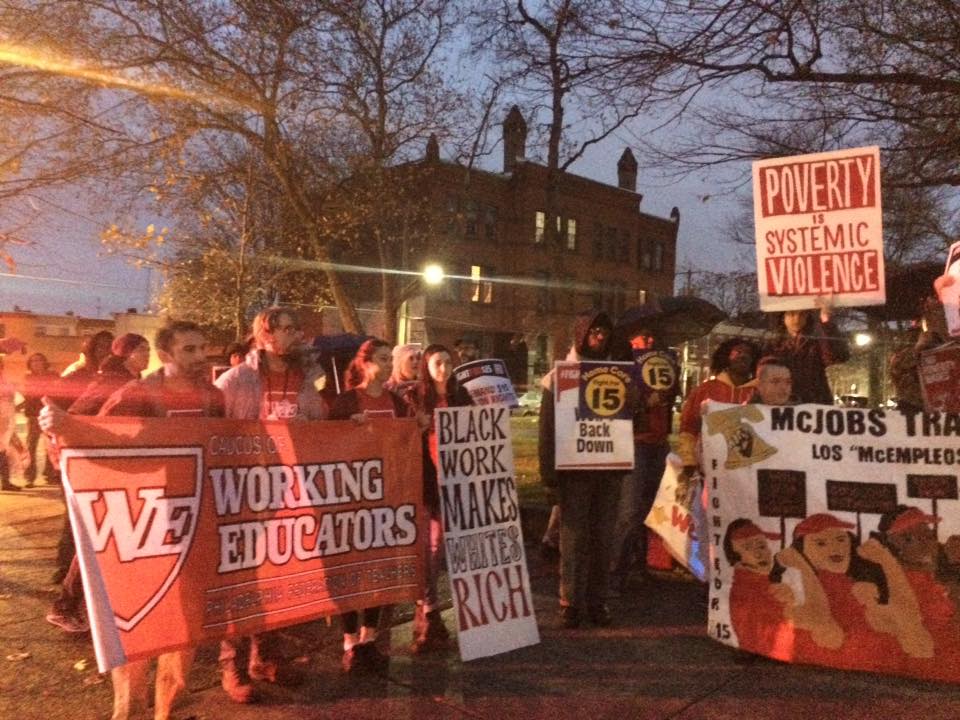 Yesterday, in the evening rain, we were arrested while advocating for a $15 hourly minimum wage. We stood alongside home care workers, uber drivers, fast food employees, and allies from across the city.

You might be asking: why would high school teachers put themselves on the line for this issue? The answer is simple: workers making minimum wage are also the parents of the students we teach.

At the current minimum wage of $7.25, if those parents work 40 hours a week, they take home a mere $267.80 after taxes -- not enough to cover the needs of a single person, much less a family. If they begin to work double or triple shifts -- as many fast food workers do -- they become absent from the lives of their own children. And with Philadelphia schools already short on resources, they then have neither the time nor money to support their children’s education the way middle-class families can afford to.

Our concern is not only for our students -- it is for all workers in our city.
Unlike workers who make minimum wage, public school teachers have a union. We are proud members of the Philadelphia Federation of Teachers. But even our established union, which affords us job stability and living wages, is feeling the squeeze. Teachers, like workers across America, keep being told to do more with less. The politicians who claim there’s no money left for public works like education are the same ones who claim that an increased minimum wage would “hurt business.” In the meantime, corporations are given abatements and loopholes to avoid taxes for schools -- just as they have the capacity to make massive profits on the backs of the workers who labor for them.

As union members, we stand in solidarity with all workers seeking a fair wage for their hard work. And as teachers, we take up this fight not just as employees, but as caretakers of the children of Philadelphia. We know that civil disobedience is one way that working people can assert control over their lives, and it’s one way that we can help keep poverty from unraveling the fabric of our families and our city.

Do you believe that poverty wages are outrageous, that Black Lives Matter, that healthcare is a human right, and that people are more important than profits? It will take more than votes and donations to make these beliefs into concrete, tangible policy. If you haven’t considered literally standing up for a cause before, start thinking about it. It’s easier than you think. We hope you’ll join us the next time around.