Working Educators in the News!

WE has been featured in a number of big news stories recently! Please read and share widely, so that more educators and community members can learn about our work strengthening our union and public schools from the ground up. 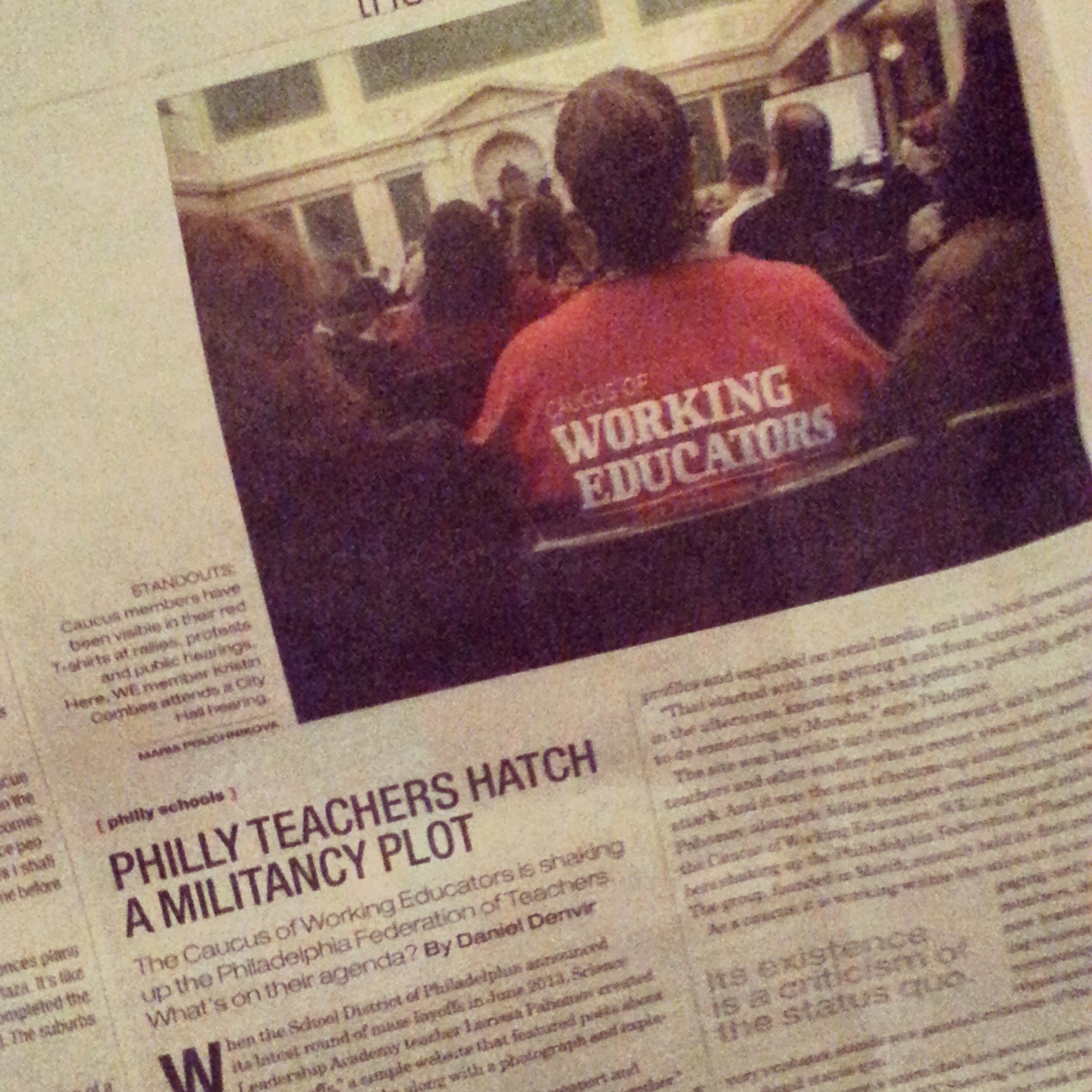 -Earlier this month, The Notebook covered our First Annual Convention:

On Nov. 8, the Caucus of Working Educators (WE) held its first annual convention at the Old First Reformed United Church of Christ in Philadelphia, where more than 125 teachers, counselors, and education advocates from Pennsylvania, New York, and New Jersey came to learn more about strategizing and organizing.

“It’s a get-together, it’s a rally, it’s an informational setting,” said Kristin Luebbert, the communications chair of the caucus. “It’s all those things, to help expand the work we need to do for our children right now.”

The keynote speaker, Yohuru Williams, a professor of history at Fairfield University and a member of the Badass Teachers Association, compared the mission of the caucus and the goal of its first conference with Martin Luther King Jr.’s goals during the civil rights movement in the 1960s.

-Then, this week's edition of the Philadelphia City Paper wrote a profile of our work so far and where we're going:

WE, which boasts 141 dues-paying members, held its first convention on Nov. 8. Its quick growth could shape the larger fight to defend public education in Philadelphia, where thousands of jobs have been eliminated, charter schools have expanded rapidly with little financial oversight, dozens of schools have closed, preparation for high-stakes testing dominates much of the curriculum and now, because of the attempt to impose health-care cost-sharing, underpaid teachers face what is effectively a salary cut.

The PFT is the single most powerful force fighting for fair funding for city schools and opposing school closings and layoffs. Its weakness and inability to mobilize its members undermines the entire movement to save Philadelphia public schools.

The WE Caucus takes inspiration from Chicago's militant Caucus of Rank and File Educators, or CORE, which took over leadership of the Chicago Teachers Union in 2010. Then, in 2012, they led teachers out on a high-profile strike that grabbed national attention and, more important, received widespread support from parents and community members.

-This weekend, Philadelphia Magazine wrote a follow-up story to the City Paper article. Rather than citing that article, which you can read here, we'd like to offer the following response:

We are excited about every conversation on how to strengthen our union, and encourage everyone to read the full piece at the City Paper to get a more complete perspective.

While WE appreciate the shout-out, Mr. McQuade's focus on intra-union politics misses the main point of our caucus: to energize the rank and file membership of the PFT, build deep partnerships with parent and community groups, and fight for a vibrant and sustainably-funded public education system in Philadelphia. We want every teacher, parent, and student to feel supported and empowered to stand up proudly for the schools our students deserve. No matter who they are, where they work, or who they associate with.

***Bonus news story: WE members Alison McDowell and Diane Payne were featured in various news outlets wearing their WE shirts at last week's City Council Hearing on Standardized Testing. Look out for more info on how WE is supporting the Opt-Out movement soon.