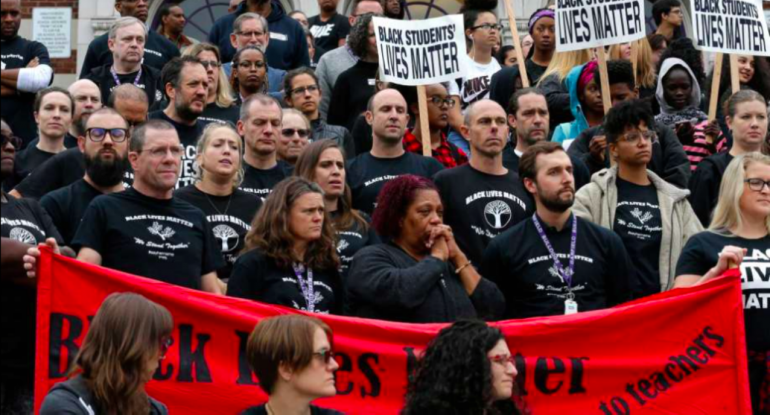 What is the legacy of our city? As the cradle of liberty, the birthplace of the nation, Philadelphia has a tradition of facing injustice with protest, dissent, and community.

Last year, the Caucus of Working Educators wrote a Racial Justice Statement in response to the stark inequalities that still exist within our local and greater community that resulted in the murders of unarmed Black men and women at the hands of police officers, unchecked mass incarceration, and the ongoing shuttering and defunding of public schools in Black and Brown neighborhoods. As unionized educators, we have a moral obligation to affirm that Black lives matter.

With this in mind, the Caucus of Working Educators is planning a week of activities and teaching informed by the 13 guiding principles of the Black Lives Matter movement.

These principles provide ideological and fully integrated solutions to institutional racism, violence, misogyny, hate and homophobia, with the intent of putting an end to the silencing of Black people.

We were inspired by a similar campaign organized last month by the Social Equality Educators Caucus of the Seattle Education Association. Thousands of Seattle teachers of all races wore #BlackLivesMatter shirts to show support for the lives of their children and communities in their fight for inclusion, advocacy,  and equity. Today, in the wake of the election results Philadelphia students are feeling anxious and fearful of what the newly elected administration means for them.

“There is no life to be found in violence. Every act of violence brings us closer to death”

Our events kick off January 23, 2017 and continue until January 27. The week begins with Restorative Justice, Empathy and Loving Engagement, three of the 13 guiding principles.  We are calling all schools to host an event, teach and empower students, and embrace the community by dedicating an hour or a day to Black Lives Matter. The following are the themes for each day.

The demands that the students made in the wake of Post Office demonstration, the Girard College integration marches, and various civil rights marches included the addition of African-American studies to the School District of Philadelphia curriculum. Philadelphia continues to make history by being one of the only cities to have this as an academic requirement.

“It is certain, in any case that ignorance. Allied with power, is the most ferocious enemy justice can have.”James Baldwin

As teachers, Philadelphians, human beings, and humane beings, we must embrace racial justice by embracing the lives of our Black students and the communities of color surrounding our schools. The Black Lives Matter movement gives us a roadmap to that destination. We hope you will join us on that journey beginning January 23. If you or your school are interested in participating please contact [email protected]

Fill out this form to sign up to participate or learn more.