Did you know that, when a union brings a contract offer to its membership, it's quite common to have a reading period before a vote?

Unions around the country give their members days or even weeks to review the contract before being asked to respond to the offer. This includes teachers unions -- the Chicago Teachers Union typically gives its members three days, and the United Federation of Teachers in New York City has given its members up to a month during previous offers!

If you are a teacher in Philadelphia, this might be news to you, because the last time we had a chance to vote on a contract in 2009, members only had a few hours to review an abbreviated version of the contract the same day as the vote. Most members didn't even know that the voice vote held on the floor (of the Liacouras Center at Temple University) was merely symbolic and that the official paper ballot vote happened afterward. This process was speedy even compared to earlier PFT contract offers, where teachers were given a number of days to review print copies of the contract before gathering for a vote.

The Caucus of Working Educators enthusiastically supports the PFT leadership in their ongoing contract negotiations, and are very much looking forward to a resolution to what has been a long and bitter struggle. To those ends, we want a contract ratification process that allows the general membership to feel confident in their vote. 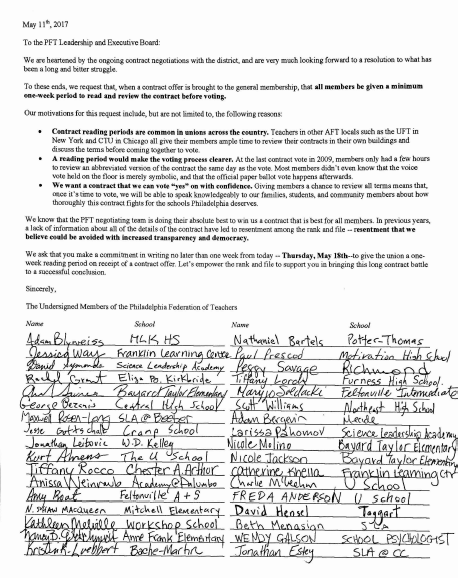 This is not an abstract concern -- last year, the administrators in CASA pushed back against their own union leadership when the negotiating team presented a contract offer with limited information and a speedy schedule for a vote. The members voted "no" in part because they felt needlessly pressured by the CASA leadership to make a quick decision.

Rushing this process risks its success. To those ends, we have requested that the PFT leadership make a public commitment to a minimum one-week reading period by this Thursday, May 18th. The request was signed by educators from dozens of schools around the district and delivered to Jerry Jordan at the executive board meeting on May 11th.

Let's empower the rank and file to bring this long contract battle to a successful conclusion!