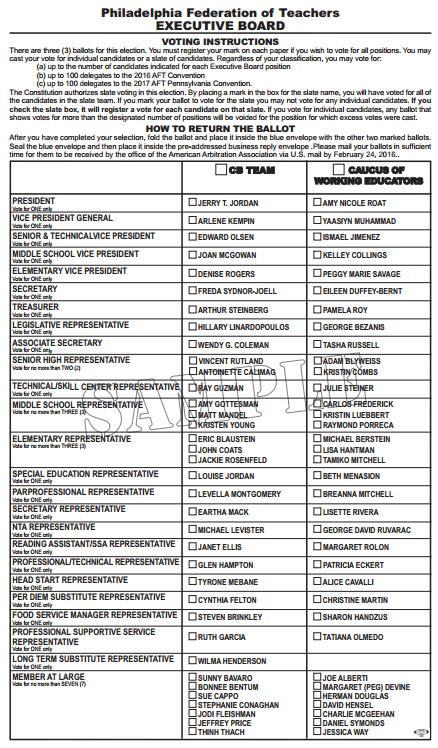 Because it's been so long since the last PFT election, many rank and file members are unfamiliar with the process of choosing their union leadership. As a result, we've encountered a lot of questions and points of confusion that deserve a response. Read on to find out what people are saying, and whether it's true or not.

Should I hand my ballot over to my Building Rep or Political Liaison? They're asking me to.

We respect the efforts that people are making to ensure that voter turnout is good. However, we find it straight-up disturbing that somebody would come between you and the secure delivery of your ballot. And letting somebody fill out your ballot for you is just crazy. Why would you hand your democratic right to vote over to somebody else? Arrange a ballot fill-out and mailing party at your building, come to one of our happy hour events on Friday Feb. 5th, and feel free to show people your sealed envelope. But send it off personally, please.

The bottom line: putting your ballot anywhere else but inside a USPS mailbox means it might not get delivered. Don't let anyone come between you and your vote.

Will the PFT know how I voted?

The answer here is an absolute NO. When you send back your ballot, you will be placing it in two envelopes: first in an anonymous ballot envelope, and then in the prepaid mailing envelope. This second, outer envelope gets scanned upon delivery. This ensures that the ballot mailbox isn't being stuffed. That envelope is then removed and discarded, leaving only your anonymous ballot. AAA will have a record of who sent in a ballot, but NOT how you voted.

Unfortunately, we have had several reports of PFT members trying to intimidate voters by telling them "the PFT is watching you and how you vote." If you hear that in person, please let the offender know that they are both a bully and a liar.

If WE win, will everybody in the PFT offices get fired?

Again, the answer here is an absolute NO. We are interested in retaining as much of the current staff as possible, especially the administrators and secretaries who have kept things running "behind the scenes" all these years. Think of it this way: when we elect a new President of the United States, do all government workers get the axe? Certainly not.

Unfortunately, several PFT staffers have explicitly stated, even threatened, that they will quit if WE wins the election. We are troubled to think that partisan loyalties would overrule whatever sense of duty and service staffers might have to the membership.

Where did the caucus get the money for this campaign?

The answer: from the rank and file of the PFT, and the friends and family who care about them. Seriously -- hats off to our fundraising team, but they didn't have to go sell their souls or make a single handshake deal to secure the funds we needed. Most of it was raised in tens and twenties at the dozens of house parties, happy hours, and other events we have had. We've raised about $30,000 total, the bulk of which is being spent on our citywide mailers.

Craziest rumor to dispel: No, we did not accept, nor were we offered, any donations from PSP. There is no version of the universe where that would happen.

How did the caucus get my home mailing address?

According to PFT election procedures, any caucus running a slate may pay to send out campaign materials to the membership, though a third party. So technically, we didn't get everybody's address -- we sent our materials to a company that mailed it for us. CB team has to do the same thing.

If you haven't received a campaign mailing from WE yet, call AAA as soon as possible to confirm you are on their ballot list: 215-731-2280. People who have called were able to get immediate confirmation.