Parents Speak Out From "The Most Toxic School In Philadelphia"

Last spring, the Philadelphia Inquirer revealed that Cassidy is “perhaps the most toxic school in the Philadelphia system,” with elevated levels of lead, asbestos, and other asthma triggers. The report helped her make sense of the serious asthma attacks her son had been suffering, and she decided to transfer him to a different school with a safer building. His condition has improved considerably since starting at the new school.

But Kenya continues to worry about the hundreds of children who cross the street and enter Cassidy each day. How is the lead dust and asbestos affecting their short-term and long-term health? Why isn’t the School District taking action to protect students’ safety?

Determined to speak out on behalf of the children in her charge, Kenya signed up to testify at the November Board of Education action meeting. During the first snowstorm of the season last Thursday, she braved the snow and ice and spent two hours battling traffic in order to appear at the meeting. Arriving just after 6pm, she found that the meeting had ended early due to the weather, and she had lost her chance to speak before the Board. Here is what she planned to say:

Good Evening, My name is Kenya Cannon and I am a parent of a former student of Lewis Cassidy Elementary. I am here today because of the many concerns that are still persistent at this school. First, I would like to read the letter that my son wrote to Senator Hughes while he was still a student at Cassidy.

I’m a student Of Cassidy Elementary. My school is unequal because we are underfunded. Our technology, broken equipment and toxic air in the building that make us different from the rest.

Lower Merion High School can borrow their own computer but in Cassidy we don’t get to use our own computers. We have to use dusty old computers everyday. All schools have to have the same amount which is fair so color doesn’t matter.

My classmates had to put our book bags on our chair for two months and the heater dripped on my jacket. People need cleaners to clean up the trash and dirt when its dirty everywhere. We need to get fixers to fix the classrooms when its broken. People was fixing something in my school and it created toxic air that made people sick like my teacher was sick for three days.

Senator Hughes our school can be better by these three things, technology, broken equipment and toxic air. Cassidy wants these things and why is because our school is underfunded.

I can make our school better.

This is the letter my son wrote in reference to the conditions at Cassidy. Until I was presented a copy of this letter, I didn’t know that all these conditions even existed. He wrote this while he was still in the fourth grade. Since then, I have transferred my children out of Cassidy for many different reasons, one of which includes my sons chronic asthma which seems to have only been a major problem while he attended that school.

I stand before you today because I am concerned for other students that still attend this school under the horrific condition the building is currently in. It isn’t fair that our children should be made to suffer and endure such unhealthy quality at school in order to receive an education.

Although Senator Hughes made several visits to Cassidy, very little has changed. Over the summer, the District announced that it would spend fifteen million dollars on lead remediation in 40 school buildings. Cassidy was not on the list.

The District is failing in one of its most basic responsibilities to our children: to keep them safe while they’re at school. We’re tired of the excuse that “there is no money” for safe school buildings. A detailed report from the Our City Our Schools coalition proves that there IS money. According to the report, the district gave away $61 million in tax abatements in 2018 alone. That’s why we are fighting to end the tax abatement and win safe schools for all of Philly’s students.

If you are a parent, educator, or concerned citizen, contact us to find out how you can get involved in this fight for healthy and safe schools. 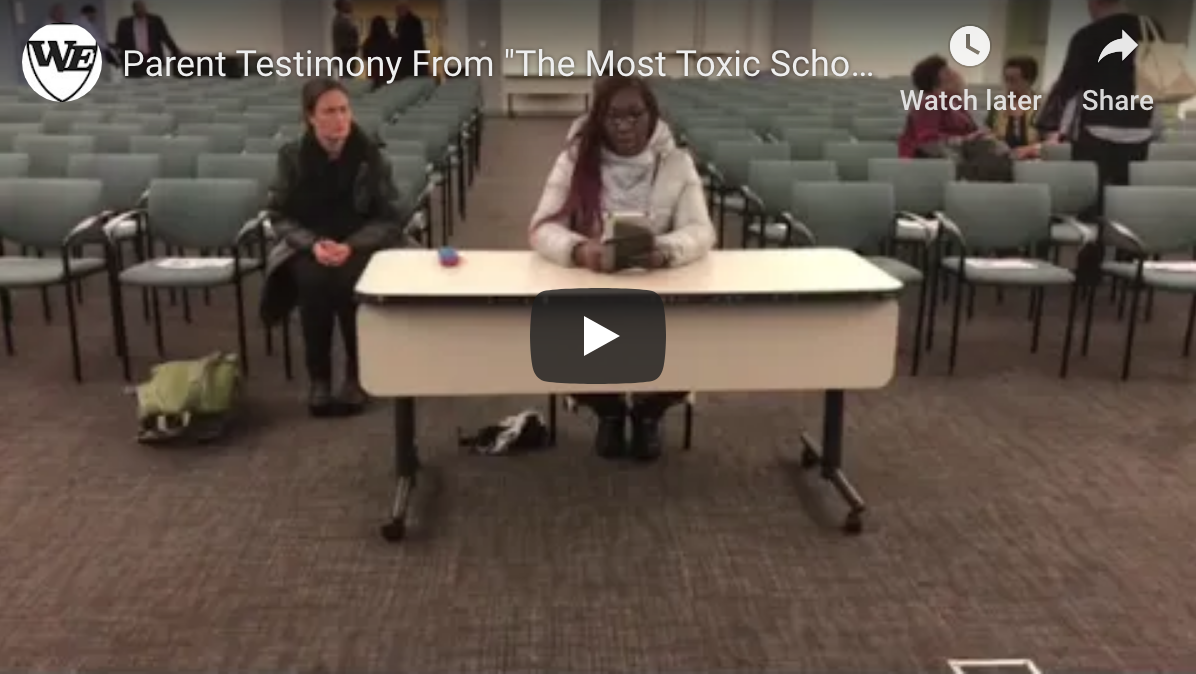