What's going on with our teacher pensions?

Much of the controversy regarding the Public School Employees’ Retirement System (PSERS) rests on the distinction between defined-benefit and defined-contribution retirement systems.

PSERS is a defined-benefit system. It promises to provide a set payout no matter the current growth or status of the fund.

Many private companies have shifted their retirement benefit plans away from defined-benefit and toward defined-contribution because these are less expensive for the employer and create more cost certainty. As many public employee pension funds have faced large gaps between the money they expect to have and the money they are expected to pay out (aka, an unfunded liability), some lawmakers have tried to force this shift.

PSERS currently has a significant unfunded liability. One study estimates that there is an almost 70% chance that PSERS will run out of money in the next 15 years. Two laws passed in the last fifteen years help explain the situation.

How do I know which category I fall into? Use the chart below to figure out which group you belong to. The PSERS website does have an online tool that will allow you to look up your member statement, but you must register in order to use the tool and it will take several days after you register for you to receive your password. The tool can be found at http://www.psers.state.pa.us/interaction/default.htm . The School District of Philadelphia Office of Human Resources also maintains a website with retirement information that can be found at http://webgui.phila.k12.pa.us/offices/r/retirement , or you can call 215-400-4680 for more information. 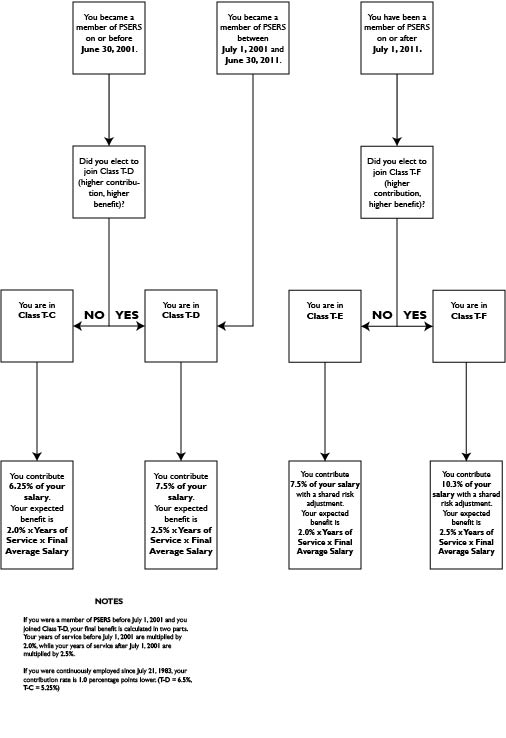 Act 9 was passed in part because the pension systems were in good shape after the high stock market returns of the 1990s. Between Act 9 and Act 120, there were two major stock market crashes, and school districts made smaller contributions in order to balance the budget. Many districts have experienced job cuts and or salary freezes and reductions since the 2009 recession, which means that current employees are putting less money than originally expected into the fund in order to pay for the benefits of current retirees. Act 120 also set caps on the rate at which school district contributions to the pension funds will increase, which can increase the gap between what the fund has on hand and what it needs to pay future benefits.

With PSERS facing such a large unfunded liability, it is very likely that the state government will make additional changes in the future. These changes could include changes to future benefits, changes to current contributions, or a conversion from the current defined-benefit system to a defined-contribution system. In fact, the Pennsylvania legislature passed a bill that would have required all new employees to join a new defined-contribution system that would eventually replace the existing defined-benefit system. Governor Wolf vetoed this bill, but we should expect changes to the pension system to be a continued subject of negotiations between the governor and the legislature.

It is also important to note that even though the bill vetoed by the governor would have left current members’ benefits and contributions unchanged at present, it would still have an effect on the health of the system. If all future employees are moved to a new defined-contribution system, that means that their payroll contributions will not go into the fund for the existing defined-benefit system. This would have the potential to increase the unfunded liability in the future.

As the negotiations continue, we will provide updates on this blog.