When the PFT Went on Strike 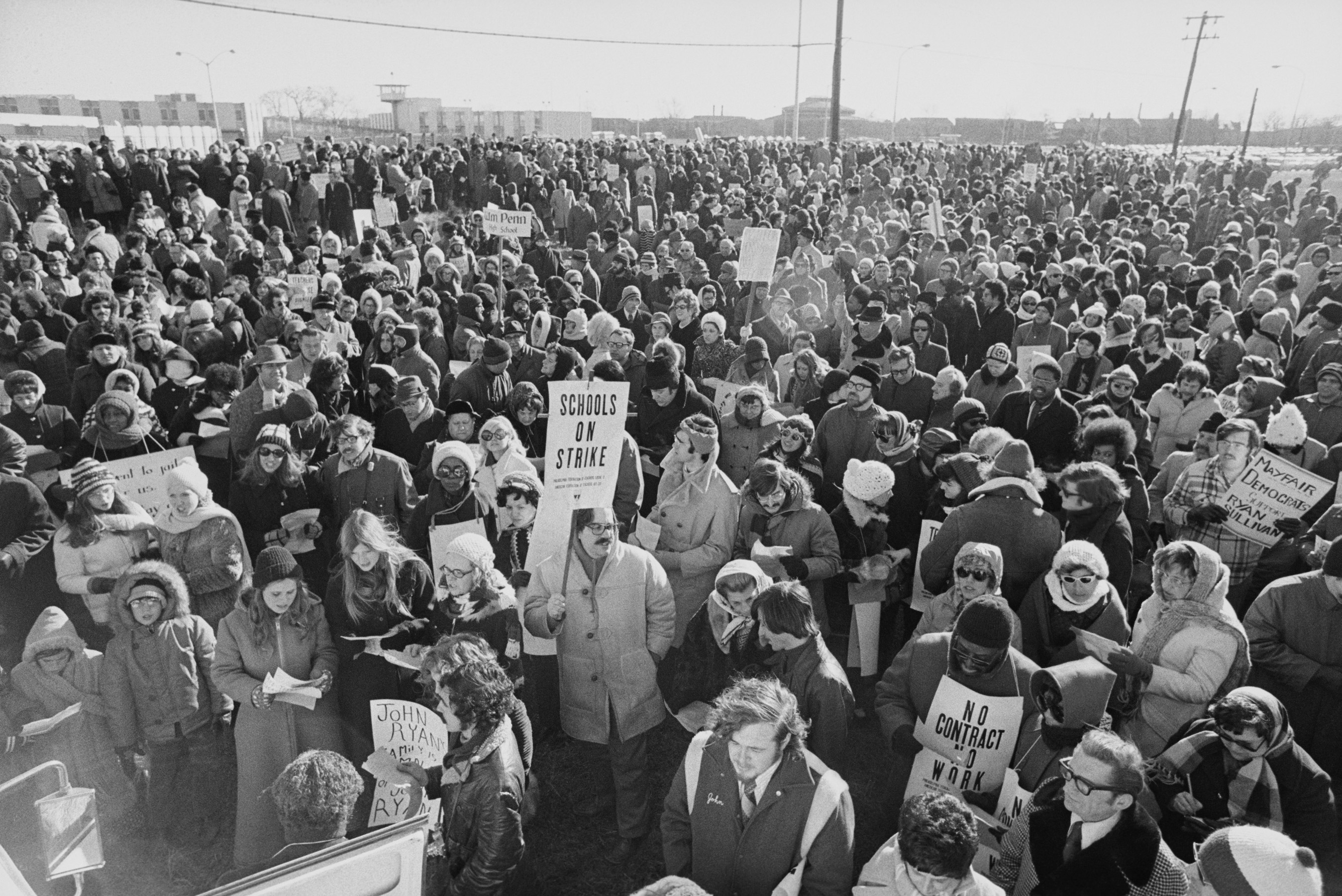 On February 11th, 1973, thousands of educators rallied outside the prison where PFT president Frank Sullivan and chief negotiator John Ryan were being held for being in contempt of court.

By Sonny Richman and John Ryan

With today's student actions and the strike in West Virginia, memories of the PFT's history are stirred.

February 2018 marks the 45th anniversary of the month of the greatest example of professionalism, courage and responsible militancy by the membership of the Philadelphia Federation of Teachers. They stood up to the most powerful mayor in the nation, his union-led educational team, the state and federal judiciary system – as well as opposition from editorial boards.

The PFT membership had already struck for almost the entire month of September, 1972. They went back to school to hear a fact-finding report--it was a disaster. The fact-finder declared that he could find anything he wanted to. Popular wisdom said that once members ended their strike, they would not go out again.

The membership proved this belief wrong by going on strike again on January 7, 1973. The mayor and his team pushed one court case after another. The Commonwealth Court declared the strike illegal and issued an injunction against all members. Despite this judicial threat, at the urging of PFT leadership, most teachers did not return to work. Arrests were made on the picket lines.

Trials were held for contempt of court. Members were losing money due to withheld salaries. The mayor's police force arrested, booked and jailed educators - sometimes more than a hundred at a single school.

The members continued the strike.

By Friday, February 9, 1973, the courts had convicted the entire PFT Executive Board of contempt of court. The following Sunday, the members rallied outside the prison, augmented by AFT and AFL-CIO members and many others from around the country.

As schools tried to reopen, the members did not cower. The number of picketing teachers increased, and the overwhelming portion of the Philadelphia labor movement planned a General Strike of Philadelphia, called A Day of Conscience.

Weekend labor rallies continued at Temple University facilities, flooded by support groups from around the country. Support came from numerous organizations including the Negro Trade Union Leadership Council and the Jewish Labor Committee.

On non-holiday weekdays, PFT leaders were permitted to leave prison -- in the company of correction officers -- to engage in negotiations. With the imprisonment, the mayor's union support on his team became fractured.

The mayor was able to secure the right to broadcast simultaneously on every radio and TV station in the area. He also had the imprisoned PFT leaders placed on "locked in feeding" -- modified solitary confinement -- in their cells while he made his address.

The lock-in lasted for the weekend.

PFT leadership, not yet imprisoned, issued a blistering counterattack. But they were not entitled to the same simultaneous audiences.

The members persisted. TV and newspaper coverage spanned from Western Europe and even to newspapers in China.

Nineteen days later, with the help of the mediator and the determination of the membership, the first satisfactory agreement was reached.

The ratification meeting on February 27th was even more impressive. As the meeting was about to begin at the convention center, the School District sent word that they were changing two settled-upon agreements regarding class size and retirement income levels.

Senior members who had been granted an extension to the end of the contract were to be terminated upon reaching the mandatory age. This would mean that their retirement income would be based on their salaries from 1969-1972 instead of 1973-1976- a huge income punishment for the rest of their lives.

This was not the plan. The members had fought for decent salaries for all members and classifications, as well as reductions in class size, improvements in the health and welfare benefits and for dozens of other protections and benefits.

Upon the urging of the leadership, the members voted to stay on strike instead of accepting the last-minute change of contract terms. That night, the School Board recanted. The next day, the members ratified.